We should mention Axure in the first place as we talk about the prototyping tools. It is a powerful tool which is widely acknowledged by the designers and has variety of functions which include flow chart and interaction design. The per month charges are in range from $29 to 99.

For Mac as a professional wireframe tool, the aim of sketch is to enhance the efficiency of design for the designers. To edit the content is easier with this tool. You can also get commonly used functions with a help of a key. For light weight designs such as drawing wireframe it is considered highly suitable.

The tool for rapid prototype design for Mac is generally Mockplus. It is one of the easiest tools to be used for designing. The prototype can be made quickly by novice. There are several features of Mockplus which coincide with the wireframe features. It is considered to some extent as a free wireframe Mac tool.

An online design collaboration for designers, developers and other product managers is Mockplus iDoc. This allows them to work together with code snippets, assets and automatic specs. Also it allows connecting the complete process of design from Sketch/ XD/PS to handoff the designs with other designers and developers without any effort.

It is a tool for drawing which is considered appropriate only for the Apple gadgets. The charts of all kinds are piece of cake for it. With its rich template the designers can make good wireframe. The net cost of this amazing software is approximately $50.

It is among the top wireframe tools for Mac. A lot of drag elements are included in it and it can also get the automatic alignment. It is easier to insert any project and PNG pictures can also be exported via it. The interface of Balsmiq Mockups is simpler and cleaner. The price is nearly $79.

It is regarded as one of the best wireframe tools. The best UX/UI Designers in Canada generally use this tool as it can add animation and video into the wireframes. This on the other hand can contribute a lot to a vivid presentation. It is always a good choice if you want to make your wireframes distinct.

Designers in general have never considered drawing wireframe making use of a Photoshop. Different elements and graphics can be combined into a wireframe with the help of it. If you have knowledge of Adobe you can consider this tool. With the help of it you can quickly draw a wireframe.

As other tools which are use for wireframe this tool can also generate a wireframe by simple drag and click. FlairBuilder is a good choice if you are still entangled fidelity. With the help of it you can easily upgrade from low fidelity sketches to higher fidelity wireframes.

A design tool which is mobile prototype is Fluid UI. It has more than 1700 wireframe models and UI cell phone widgets. It can be updated as well. The applications which can be applied to variety of platforms can be created by it such as Mac, android and windows. The tool comes with free trial before you purchase it.

Ali Surani is an SEO and Inbound Marketing Specialist, Currently working for an online firm. He specializes in search engine marketing and online reputation management, having managed online marketing campaigns for clients from large enterprises to small businesses. 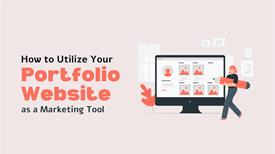 How to Utilize Your Portfolio Website as a Marketing Tool

If you want to launch a successful marketing career or business, you should have an effective marketing portfolio. Here are five ways to utilize it.

Communication makes us human; it is one of those things in our lives that truly defines who we are.