Hybrid vs Native App: Which One's Best for Your Business 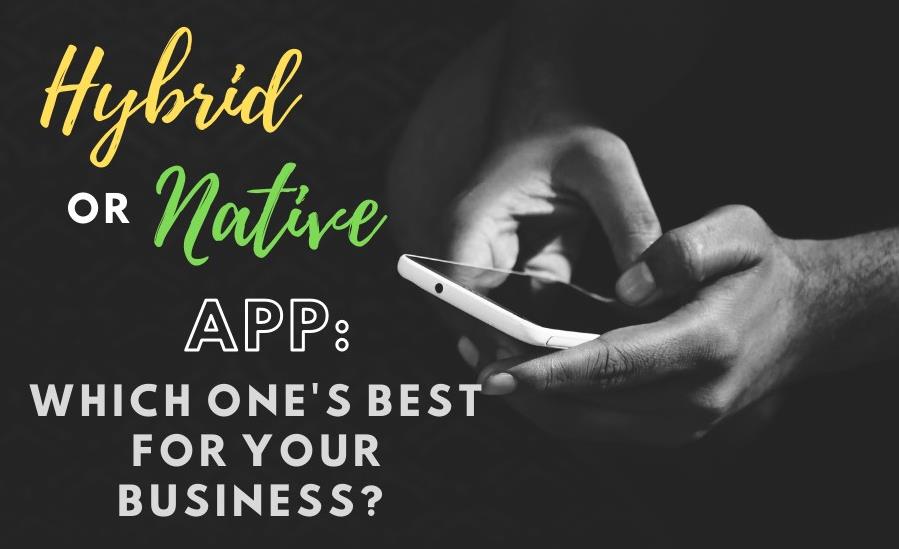 Building a business app can be your key to thriving amidst the competition. Choosing between a hybrid or native app is part of making your business app a success.

Mobile is currently regarded as one of the most dynamic business methods. They have become the latest norm for creating consumer relationships. With the constant advancement of mobile technologies and the constant shift in the mobile app development trends, and apps have become one of the most critical resources for starting a business empire. That enables businesses and brands to provide their target audience with a comfortable and up-to-date experience. If you plan to incorporate mobile apps into your enterprise, you may come across a decision whether to create a hybrid or native app.

What Is A Native App?

A native app is a device or program that has been created for a particular operating system. That means that these types of applications can only be run on one device. You are also aware that there are many mobile operating systems on the market, the most common of iOS and Android OS. These are two of the most well-known and commonly used in this modern era.

For instance, you want to build a mobile app for your company, and you want it to run on two iOS and Android platforms, then two apps will be made, one for iOS and the other for Android. All of which will be built in a different language as you want to run your business app on two platforms.

Advantages Of A Native App

With the development of native smartphone apps, it is designed and tailored for a particular device. Because of this, the app displays an incredibly high degree of efficiency. Native apps are speedy and flexible since they are designed for a specific platform. That is also because it is compiled using core platform programming languages and APIs. It makes the app more effective, as well. As users move through a native mobile app, content and visual elements are already stored on their devices, which means load times are fast.

Native apps inherit the device's OS interfaces that make it feel like a seamless part. What makes it more valuable is the opportunity to deliver a better customer interface. Since it is uniquely developed for an operating system, it meets standards that essentially improve and match user functionality with a given operating system. As a result, the app's flow is more normal as it has unique UI standards for each platform. That helps the user to understand the app. Adhering to clear instructions eliminates the learning curve and encourages people to communicate with native apps using behaviors they are already familiar with.

It is much more difficult to manage two separate programs in one codebase than two codebases applications. With native app development, you have fewer error dependencies because you don't focus on a cross-platform tool. Hybrid applications navigate hardware across a bridge that sometimes speeds down progress and can be a challenging user interface.

What Is A Hybrid App?

Hybrid app is a type of application that is written only once but runs on all platforms. That Implies that you only have to build one time to operate on the whole operating system. There is no need to develop a new program for a different operating system. Developers can write the code once and launch it on iOS, Android OS, and other operating systems.

Furthermore, it is a software application that incorporates a native app and web applications' attributes and interfaces. Hybrid apps are mobile apps that have been installed in a native software shell. When downloaded from the app store and installed locally, the shell will connect to the mobile platform's capabilities.

Advantages of A Hybrid App

Due to the integrated creation of hybrid smartphone applications, companies would not have to independently spend on various versions of multi-platform apps. Instead, hybrid frameworks allow developers to create a single performance, then write and manage separate code bases for multiple platforms. This ability saves a large amount of money to small businesses who wish to save a lot of money and attract more sales.

Native apps have set a robust benchmark in terms of speed and performance; however,  there is also no question of speed when it comes to hybrid development. When competing with other mobile development options, hybrid applications are more straightforward than mobile web apps or sensitive websites. Since they don't have to focus too much on network connectivity, the hybrid app is still supposed to run smoothly on the phone's screen even though there are many users.

You may have found a difference in the page's design and functionality as you juggle through various applications. But if the app is built on a hybrid architecture, the hybrid UI app stays responsive and delivers a straightforward user interface across different mobile platforms.

For offline use, the hybrid mobile app integrates the device's API and then executes it while mobile devices are not linked to the Internet due to limited connection. It helps in in the app's quick loading and enables the user to reduce data usage. With this exceptional benefit, the hybrid application is often strongly valued.

Another benefit of the development of hybrid apps is its simpler management. When maintenance is being discussed on a hybrid or native app, the latter needs the developers implement new versions of each update. Also, users will have to upgrade their applications with each new version. A hybrid app, on the other hand, bypasses version control and allows app management to boost a web page in real-time quickly.

The Best For Your Business: Hybrid or Native App?

The type of app you would choose would strongly depend on your business niche, needs, and budget. Either you leverage on a hybrid or native app, you have to remember that both can perform satisfactorily to help your business thrive and combat competition. Moreover, you have to remember that both types of mobile apps have their share of pros and cons.

If you need a high performing, rich user interface, and increased security, then a native app is a good option for you. However, it sometimes come at a cost and the need to be built for every platform. Should you like to have an app that is cost-saving yet have a decent performance, quick updates, and accessibility on a kind of device, then you can opt for a hybrid app. Nonetheless, you also have to remember that hybrid apps can take time to be developed and sometimes sacrifice user experience.

Hybrid vs Native App Business
« Protect Yourself When Holiday Shopping Online
Alexander Graham Bell: Teacher of the Deaf, Father of the Modern Telephone »

Maricar worked as a marketing professional for almost a decade. She became part of the biggest real estate company/mall operator in the Philippines and handled concerts, events, and community service-related activities. Leaving her corporate job for good to pursue her dreams, she has now ventured in the path of content writing and currently writes for Softvire Australia - the leading software e-Commerce company in Australia and Softvire New Zealand. A Harry Potter fan, she loves to watch animated series and movies during her spare time.

There’s no doubt cryptocurrency, and its incorporation into everyday life is here to stay.

The world of cryptocurrency can be intimidating to those who are new to it, but there are many different models for trading and investing in digital currencies.

Rapid climate change and biodiversity loss are interrelated issues our planet is facing.

Owning a business is challenging and can take a lot of time from you. Here's how you can manage your time more effectively as a business owner.

Because of the fast lift in internet business and advanced promotions, SEO has turned into all the rage.

When it comes to building your e-commerce store brand, it’s important to remember is that branding isn’t your name or a logo.